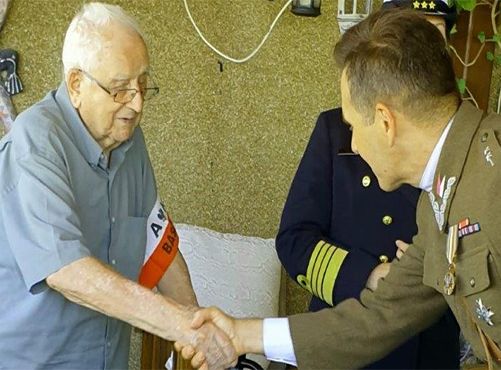 Dear friends,
On Saturday, September 20th, we had the opportunity to travel to Alicante, together with the Polish Defense Attaché, Captain Dorota Stachura, to visit and pay small tribute to Antoni Dabrowski “León”.

Antoni, born in 1925, was a corporal in the Armia Krajowa (National Army) and fought in the Warsaw Uprising as a member of the Baszta Battalion. After the Uprising he was taken as a prisoner of war to Yugoslavia, but escaped,he briefly joined the Yugoslav partisans and went to Italy to join the 3rd “Karpathic” Rifle Division which was part of the 2nd Polish Corps.  After the war he was a sailor and on one of his trips he met his wife in Valencia, settling in our country. Antoni is the only known surviving Polish veteran of World War II in Spain.

During the visit, Antoni had an interesting conversation with Captain Stachura, looking at a book about the Warsaw Uprising together, telling some anecdotes.  We are very grateful to the Dabrowski family for their hospitality, and most importantly, we thank Antoni for his extraordinary service in the fight for freedom.
Alberto Trujillo
Hco.Cultural Association Poland First to Fight.